The steute business unit “Extreme” develops and manufactures switchgear for ambient conditions in which conventional switches and sensors would quickly malfunction or never be suitable in the first place. Such conditions include subzero temperatures and explosive atmospheres. 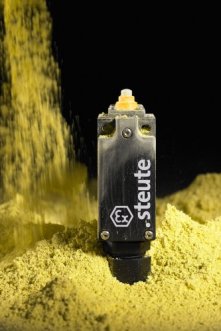 For the combination of these two areas, each of which has its own specific set of requirements, steute has developed new position switches and magnetic sensors which it will be presenting at the SPS IPC Drives.

The new Ex 97 and Ex 99 series of position switches, with standard dimensions to DIN EN50047 and DIN EN 50041, will complement the existing Extreme range. They can be used in Ex zones 1 and 2 (gas-Ex), as well as 21 and 22 (dust-Ex), and also in safety-related applications – as approved position switches with an added safety function. Different actuators are available for optimal adjustment to individual applications.

The temperature range for these Ex position switches extends down as far as -60oC. The appropriate tests, e.g. impact tests in extreme subzero temperatures, have of course all been passed. The two new series are sealed against dust and are anti-corrosive. In the development of these new switches, steute had in mind applications such as the position monitoring of valves in oil and gas exploration.

As an alternative to these electromechanical switching devices, steute has also developed an Ex RC M20 KST range of cylindrical magnetic sensors for Ex zones and subzero temperatures. Their characteristics are equally extreme and they also work reliably in temperatures down to -60oC. Because they are so well sealed, they are extremely durable, even in very dusty environments.

Sé Read-out iris uaithoibríoch, ionstraim agus stiúradh na hÉireann agus an "Signpost" a áit ar an idirlín! Read-out is Ireland's journal of automation, instrumentation and control and the Instrumentation Signpost is it's web presence.
View all posts by Eoin Ó Riain →
This entry was posted in SPS/IPC/Drives Expo, steute and tagged Temperature. Bookmark the permalink.