#HM17 Robotics inspiration from elephants, octopuses and the human arm!

While the BionicCobot is inspired by the natural movement of the human arm, the BionicMotionRobot is inspired by the way elephant trunks or octopus tentacles move, and the way they wrap around objects was the inspiration behind the OctopusGripper. All three projects show what hazard-free, direct human-robot collaboration could look like in future and are among the future-oriented concepts that Festo’s Bionic Learning Network are showcasing at the Hannover Messe 2017 trade fair.

The strict separation between the tasks of humans and those of robots is now making way for a more collaborative working space. The latest bionic lightweight robots from Festo are ideally suited for safe human-robot collaboration due to their natural movement patterns and their inherently compliant pneumatics. Festo believes that the evolution of these lightweight cobots demonstrates a new, cost-efficient alternative to classic robot concepts for the future.

The movement patterns of the BionicCobot are modelled on those of the human arm, from the shoulder via the upper arm, elbow, radius and ulna down to its gripping hand. Each of its seven joints uses precision-controlled closed loop pneumatics to emulate the natural operating mechanism of the biceps and triceps – the efficient interplay of flexor and extensor muscles. The BionicCobot can thus execute very delicate movements, just like its biological model.

The movements of the BionicCobot can be finely regulated so as to be either powerful and dynamic, or sensitive and yielding; the system therefore avoids endangering humans, even in the case of a collision. This is made possible by the “Festo Motion Terminal”, a new pneumatic automation platform that unites high-precision mechanics, sensors and complex control and measuring technology within a very small space.

Depending on the task to be carried out, the BionicCobot can be fitted with different gripping systems. It is intuitively operated by means of a specially developed graphic user interface: the user can teach the BionicCobot the actions to be performed and parametrise them. The defined work steps can then be transferred by drag-and-drop to a sequencer track for implementation in any desired order. The entire movement sequence is virtually depicted and simultaneously simulated. The interface between the tablet and the Festo Motion Terminal is the ROS (robot operating system) platform, on which the kinematic path planning is calculated.

BionicMotionRobot – a lightweight robot with natural forms of movement

An elephant’s trunk and an octopus’s tentacles can move in a highly flexible way. The BionicMotionRobot effortlessly emulates these fluent movement patterns with its flexible pneumatic bellows structure and corresponding valve and control technology. The concept of inherently flexible kinematics is derived from an earlier Festo Bionic project, the Bionic Handling Assistant from 2010. A new type of outer skin made from a 3D textile knitted fabric now enables the BionicMotionRobot to fully deploy the force potential of the entire kinematic system. The bionic robot arm has a very impressive weight to payload ratio with a loadbearing capacity of almost three kilograms – with around the same net weight. 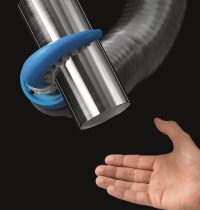 With the OctopusGripper, Festo is presenting a bionic gripper based on the octopus’s tentacles. It consists of a soft silicone structure that can be pneumatically controlled. If compressed air is applied to it, the tentacle bends inwards and can wrap around the object being gripped in a form-fitting and gentle manner. Just as with its natural counterpart, two rows of actively and passively controlled suction cups are arranged on the inside of the silicone tentacle. This enables the OctopusGripper to pick up and hold a large number of differently shaped objects. The flexible gripper has a wide range of possible applications in combination with the BionicMotionRobot and the BionicCobot, and the Festo Motion Terminal controls and regulates both the robot arms and the gripper. Thanks to its soft, inherently flexible structure, the OctopusGripper has great potential for use in collaborative working spaces in the future.

Over ten years ago, Festo initiated the Bionic Learning Network, which is closely linked with the processes of innovation within the company. In cooperation with students, renowned universities, institutes and development companies, Festo sponsors projects, testbeds and technology platforms. The objective is to benefit from bionics as a source of inspiration for new technologies and to realise these in industrial automation.

Sé Read-out iris uaithoibríoch, ionstraim agus stiúradh na hÉireann agus an "Signpost" a áit ar an idirlín! Read-out is Ireland's journal of automation, instrumentation and control and the Instrumentation Signpost is it's web presence.
View all posts by Eoin Ó Riain →
This entry was posted in Event, Festo, Hannover and tagged Pneumatics, Robotics. Bookmark the permalink.