For many years, there have been some rumours on an improved CAN protocol. At the 13th iCC organized by the CiA association, Bosch introduced the CAN-FD (flexible data-rate) protocol. 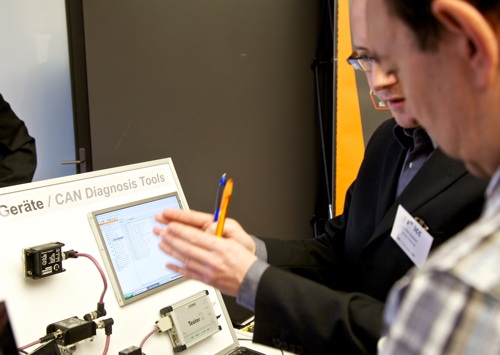 CAN experts from all over the world discussed many topics in very details, e.g. about failure detection possibilities with sophisticated tools

It is backwards compatible to the CAN data link layer protocol (ISO 11898-1). It allows higher transmission speeds in a part of the data frame. Bosch and Vector demonstrated a 15 Mbit/s CAN-FD network prototype using off-the-shelf transceiver chips compliant with ISO 11898-2. Besides the increase of throughput, the introduced protocol supports larger payloads. Up to 64 byte are transmitted in a single data-frame. This avoids  a segmentation of data in many cases.

Several carmakers (e.g. General Motors and Renault), and indeed other industries, were very interested in the new protocol. For the automotive industry it is very important that the CAN cabling and the other physical layer components including transceiver chips can be reused.

One paper was focused on how to map the CANopen application layer to CAN-FD. The prolongation of PDOs (process data objects) is most important. PDOs with up to 64 byte payload will allow transmission of different 64-bit commands in one message. This overcomes today’s data consistency problems. “In particular, the drives and motion control industry will appreciate this feature,” said Heinz-Juergen Oertel, CiA’s former technical director.

The iCC took place in Germany and was participated by more than 130 experts from all over the world, including India and Malaysia. The speakers covered several topics such as Linux software driver, CAN applications, and usage of CAN-related tools. At the conference some silicon vendors launched their CAN transceivers supporting selective wake-up functionality as standardized in ISO 11898-6. These chips will enable partial networking; this means the user is able to switch single devices on and off, in order to reduce energy consumption.

All presentations were very technical with virtually no product placements.

A good example was a paper about new strategies to detect CAN nodes in a network, which are configured wrongly regarding the bit-timing. The authors presented interesting solutions: They measure the individual “fingerprint” of the CAN node by means of an oscilloscope.

Another speaker reported in detail about challenges during the design of one of the largest CAN networks. This system with more than 1500 CAN nodes was used to illuminate the Olympic Rings in Vancouver (Canada). All iCC papers are available for download on CiA’s website.

The conference was accompanied by a tabletop exhibition. Several companies showed new products. And CiA celebrated its 20th anniversary at the conference. The International users’ and manufacturers’ group has organised this event since 1994, and continues to develop the CANopen specifications.

Sé Read-out iris uaithoibríoch, ionstraim agus stiúradh na hÉireann agus an "Signpost" a áit ar an idirlín! Read-out is Ireland's journal of automation, instrumentation and control and the Instrumentation Signpost is it's web presence.
View all posts by Eoin Ó Riain →
This entry was posted in Event, iCC and tagged CAN, CiA, Communications, Fieldbus, Germany. Bookmark the permalink.