Experience with Emerson’s DeltaV™ and CHARMS

Solvay is the world’s largest manufacturer of key chemicals such as hydrogen peroxide and soda ash, and is among the world leaders in the specialty polymers market. The Tavaux plant, in the Franche-Comté region of eastern France, is the largest chemical production site in the Solvay group. The plant produces 1.2 million tons per year of multiple products including 280,000 tonnes of PVC annually and 55,000 tonnes of PVDC. 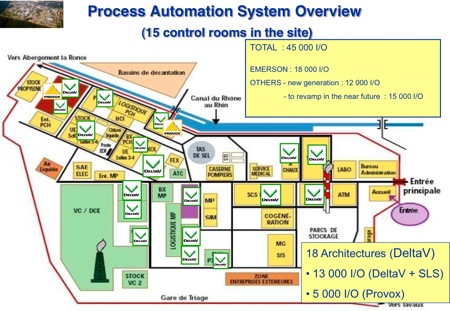 The Tavaux plant currently has 28 separate control architectures with a total of 45,000 I/O. Eighteen of these are DeltaV-based with a total of 12,000 I/O and two legacy PROVOX systems with around 5,000 I/O. In addition, a considerable amount of DeltaV SIS safety systems is installed and AMS Suite: Device Manager is actively used for instrument maintenance and diagnostics. An ambitious migration programme has seen around 15,000 I/O points modernised since 2005. There are further plans to upgrade several systems (10,000 I/O) as well as the expansion of some units (5,000 I/O).

With an eye towards future projects, Solvay evaluated version 11 of Emerson’s DeltaV system during a Beta test in March 2010. The focus of the nine day test programme was on understanding the installation processes, and allowing Solvay to develop best practices for project execution using CHARMS I/O.

With the test successfully completed, Solvay was confident that the CHARMS I/O system would be compatible with the existing field devices (including devices from third party suppliers) and with their wiring requirements. The beta test validated that it would be possible to reduce the number of system cabinets needed for future projects significantly. Solvay also verified compatibility of DeltaV Version 11 with installed DeltaV SIS safety systems. Solvay liked the labelling feature of the system, which identifies each signal/channel with a text that fits over the terminals of the CHARMS module. Based on the test results, Solvay Tavaux produced an internal document outlining the best practices for CHARMS I/O installation and wiring.

Solvay Tavaux decided to deploy the DeltaV v11 system on two projects. The first of these was the modernisation of the automation system of its pilot plastics processing plant. The system consists of one controller with 200 CHARMS I/O. Space was a key concern, with the system cabinet being located in a hallway.  The DeltaV Version 11 system takes up half as much room as a “classical” DCS and its associated wiring. Using CHARMS technology, Solvay was also able to eliminate the marshalling cabinet and the associated wiring and design entirely, as well as the terminal junction box. Cables now route directly from junction boxes in the field to the CHARMS cabinets. Wiring work was simplified.

The DeltaV Version 11 system and CHARMS greatly simplified the management of change. It was easier for Solvay to define what hardware was required for the system, and the overall design was simplified. This allowed Solvay to define the hardware required more accurately and made it easier to assign additional signals where they were needed. Previously, Solvay had to always add an extra 5 percent on their I/O requirements because of change orders, wrong estimations, and other problems. With CHARMS, the definition of the I/O was the same throughout the project.

The deployment of DeltaV Version 11 also reduced the engineering effort required. Solvay does all of its own engineering in-house, so reducing this effort effectively reduces cost for the company. The reduced engineering effort also means fast start-up time and reduced downtime. This will become increasingly important as Solvay continues to focus on fast turnarounds for its planned migration projects. Currently, planned shutdown times for migration projects are only two weeks, which requires a lot of up-front planning and precise execution.

With successful implementation of the pilot plastics plant system, Solvay Tavaux is now planning to deploy DeltaV Version 11 in its critical production processes. One of the first applications is the IXOL production process. IXOL is a rigid polyurethane foam that is also flame retardant and is used in construction applications. The current system controlling the process has around 1,300 I/O, including the safety instrumented system. The unit is scheduled for start-up in March of 2011.

Space savings and decreased turnaround time associated with CHARMS and electronic marshalling technology are major reasons for choosing DeltaV Version 11 for this project. The technical rooms are already cramped, and the new system must be installed in parallel with the old system until the old system can be decommissioned. Solvay is also keen to minimise downtime related to migration projects to just two weeks. After which, Solvay can start to lose money. The first week of the project is usually dedicated to the wiring and related tasks, with the second week dedicated to FAT and SAT. Using CHARMS and electronic marshalling, engineering work is simplified, including the cabinet design, I/O design, wiring diagrams, and the wiring work itself. CHARMS therefore help to minimise the downtime incurred.